The trio Das Orchester was founded in 1999 as the result of a staging of a theatre piece based on the book ”Prayer for Chernobyl” by the Belarusian writer Svetlana Aleksijevich. 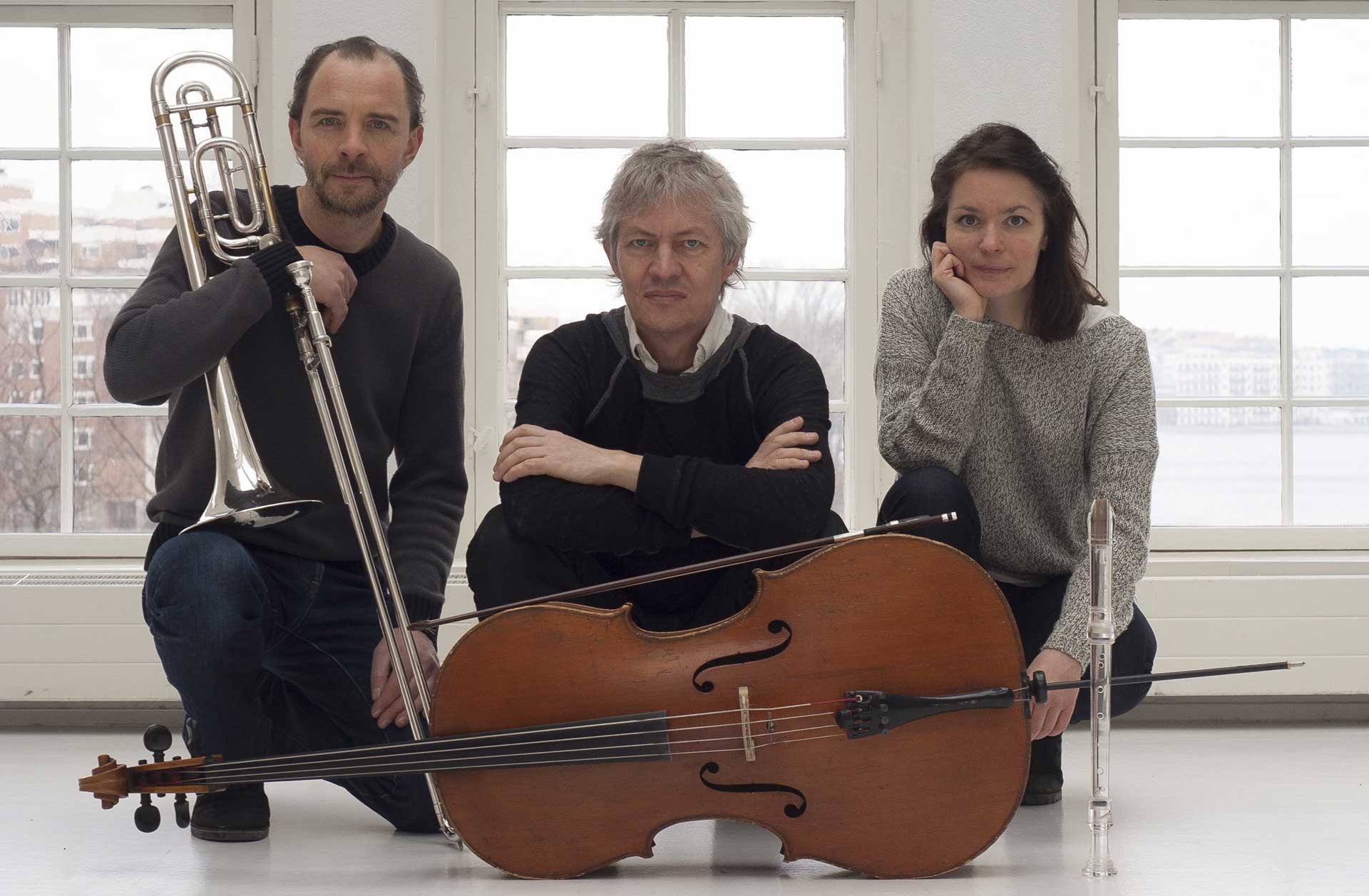 Das Orchester was founded in 1999 as the result of a staging of a theatre piece based on the book ”Prayer for Chernobyl” by the Belarusian writer Svetlana Aleksijevich. The unusual constellation was in fact, to a certain extent, inspired by the subject of the book.However, the combination of instruments with their disparate characters, presented no existing repertoire and the first piece performed by the ensemble was written by the cellist, Chrichan Larson.

Since that first theatre production, Das Orchester has through the years collaborated with numerous composers producing a solid repertoire base. Exploring the heterogeneous mystery of the three instruments as a constellation forming a chamber trio, has proved to be an exciting challenge. So far, the ensemble has performed throughout Scandinavia, Germany and France. Apart from the purely musical performances, Das Orchester has also produced concerts in collaboration with singers and dancers.

Kerstin FRÖDIN is active as a soloist and chamber musician working with newly– written as well as early music. She earned her soloist’s diploma from the Royal College of Music, Stockholm in 1996, studying with Prof. Clas Pehrsson. She continued her recorder studies in Paris under Pierre Hamon. Kerstin is a member of ensemble Lipparella a group focusing on performing newly written music for baroque instruments, the italian baroque ensemble Il Gene Barocco and the experimental trio Das Orchester. She has also been musically active in the fields of opera, theater and dance. Kerstin has given the first performance of works both as a soloist and chamber musician. In 2006, she received The Crystal Prize from the Association of Swedish Conducters for her interpretations of contemporary music. She has performed at swedish and international festivals such as Festivale d’Ile de France, Festival Oude Muziek, Netherlands, Grandezze & Meraviglie Modena Italy, as well as Helsingfors Festspel, Nordic Music Days, Kalv Festival, Båstad Chamber Music Festival and Stockholm New Music, Sweden. Kerstin has recorded with such labels as BIS, Caprice, Phono Suecia, db-productions and Proprius/Naxos.

Ivo NILSSON made his debut as a soloist with the Swedish Radio Symphony Orchestra in 1989, after studies at the Royal Academy of Music in Stockholm and at IRCAM in Paris. The same year he also made his debut as a composer with an octet premiered by ensemble l ́Itineraire at Radio France. He is a member of the ensembles Axelsson & Nilsson-duo, Ensemble Son and KammarensembleN. As a soloist and with the above mentioned ensembles he has had performances at festivals like Beyond 440 Hz (Los Angeles), Chicago Jazz festival, Gaudeamus Music Days (Amsterdam), Huddersfield Contemporary Music festival, Inventionen (Berlin), Ilhom (Tashkent), Musica (Strasbourg), Roaring Hoofs (Mongolia), 2 Days and 2 Nights (Odessa),Sonorities (Belfast), Spazio Musica (Cagliari), Spectra (Tirana), Time of music (Viitasaari), Ultima (Oslo), Warsaw Autumn and the World Music Days (Hong Kong, Stockholm and Zagreb). His is a recording artist on the labels Alice, Caprice, dbp, Phono Suecia, SFZ & Wergo. Ivo Nilsson was the artistic director of the Stockholm New Music festival in 2003 & 2005. In 2007 Ivo Nilsson was awarded the Interpreters price from the Society of Swedish Composers.

Chrichan LARSON was born in 1956 and studied the cello with Gustav Gröndahl at the Royal College of Music, Stockholm and graduated in 1974 with a postgraduate soloist diploma. He continued his studies with Paul Boufil in Paris and Reine Flachot and Mstislav Rostropovich in Basel. Chrichan Larson has performed as Principal Cellist with the Royal Stockholm Philharmonic Orchestra and has performed with Ensemble Inter- Contemporain in Paris between 1983 and 1989. Larson is an accomplished chamber musician, with his name attached to ensembles such as Trio des Lyres, Ma Stockholm, Broken Consort, Fluxkvartetten and KammarensembleN. As a composer, he is largely self-taught; however, he took some lessons with Hans Eklund during his years of study in Stockholm, as well as with Gerald Bennet in Basel. Larson’s main works are chamber music for different constellations, as well as works for Sinfonietta such as Lissages and Tre campi.

Experience the second of the two records that Das Orchester have released on the Blue Music Group label, the most recent – Le Nouvel Amour – revealing new facets of expression in collaboration with the soprano Alexandra Büchel.